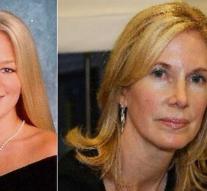 - Beth Holloway, the mother of the Natalee, who has been missing in Aruba since 2005, is furious at the creators of a documentary about her daughter. She demands $ 35 million from the producers of the 'fake documentary'.

The complaint states that the makers of The Disappearance of Natalee Holloway had gotten her to send DNA, AP reports. They claimed to have found the remains of her missing daughter. Beth has thus experienced a terrible time with a lot of uncertainty. Waiting for news has 'completely destroyed' the woman. Natalee was never found.

Holloway, a teacher in Alabama, thinks the producers knew that the remains could not be from Natalee. The 6-part series of NBC's Oxygen Media would be 'a script, pre-planned farce'.

Natalee disappeared in May 2005 without a trace during a vacation with fellow students in Aruba. She was last seen in the company of Dutchman Joran van der Sloot, who is currently serving a sentence in Peru of 28 years for the murder of Stephany Flores Ramirez (21).