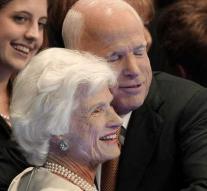 washington - The mother of John McCain, who died at the age of 81, will be the most notable guest at his funeral next week. She is now 106 years old.

Roberta McCain lost her twin sister, her husband and also her son. Now that she appears to be 'just' present at John's funeral in spite of poor health, American media pick up special stories about her.

She once wanted to rent a car during a visit to Europe; that was not allowed, because she was 'too old'. The then 93-year-old Roberta did not know, forgot to rent, and bought a Peugeot.

Later she had that car shipped to the east coast of the US, to personally drive him to San Francisco. She thus traversed the whole country.

John received a bell, and heard that she was on a road trip- all alone- while she had passed the ninety amply. Typically her, writes The Times: the woman was adventurous, loved to travel, and was not afraid of anything.

In his book McCain described his mother as 'a woman who was raised to be strong, determined, enjoying life, and engaging every possibility'. 'I am grateful for the strength she showed me. '