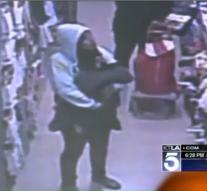 - The woman Wednesday left a baby in a crib in New York, will not be prosecuted.

The woman was seen on images of a shop near the church, where she bought the towel which they left it. Police have spoken to her, but she gets no punishment because she left her child safe at the church, reports the New York Post.

Under the Safe- Harbor-law 'allowed children in New York are placed under abandoned some circumstances in safe places such as police stations and hospitals.

The baby was found Monday by the parish priest in the manger of the nativity scene. The umbilical cord was still attached to the boy.