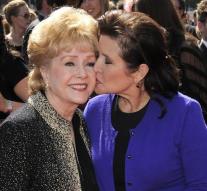 beverly hills - American actress Debbie Reynolds (84) is deceased, a day after her daughter Carrie Fisher (60) died. 'They wanted to be with Carrie,' said Reynolds' son Todd to Variety.

The actress, known for Hollywood musicals and comedies in the fifties and sixties, was Wednesday in Beverly Hills to visit her son. Together they were arranging Fisher's funeral to it. After a suspected stroke Reynolds was rushed to the hospital, where she died.

The 84-year-old actress is known for her roles in classic films such as 'Singin 'in the Rain and The Unsinkable Molly Brown,' for which she received an Oscar nomination as best actress. In 2015, Reynolds received a lifetime achievement award from the union for film actors in the United States.

Tuesday, the daughter of Reynolds, Carrie Fisher died as a result of a massive heart attack. Fisher was world famous for her portrayal of Princess Leia in the Star Wars movies.