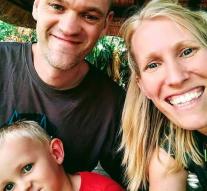 - The wife and three-year-old son of a British scientist fight for their lives after being attacked by a giraffe. Reportedly, the animal wanted to protect her young.

The incident took place in a wildlife sanctuary in South Africa, reports the Daily Mail. Researcher Sam Williams was on his way home when he had to watch his wife and son being attacked. Williams managed to scare the kicking giraffe and saved the lives of his loved ones.

The victims were flown to Johannesburg by a trauma team. There, the two are hospitalized. Their condition is critical, but stable.

One suspects that the giraffe felt threatened by the sudden appearance of mother and son. To protect her calf, she attacked the couple.