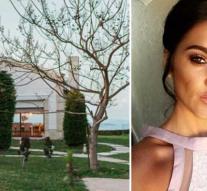 leeds - A 29-year-old British mother died of the consequences of a butt lift operation in a Turkish plastic surgery clinic.

Leah Cambridge had traveled to the Turkish city of Izmir, to raise her buttocks for more than 3300 euros and have them lifted.

It is said that the woman died on the operating table, but her exact cause of death has not yet been revealed. Lea's partner, Scott Frank, is now arguing for more clarity about the death of his children's mother. This is how the Daily Mail reports.

He traveled with his in-laws to Turkey to bring Lea's body home again. 'I was still happy two days ago. Now I am a broken man. 'Thus Scott.

Scott warns people who are thinking about doing a cosmetic procedure. 'People have to realize that things can go wrong. 'He is left with a broken heart. 'I will always leave a spot at the dining table so that our sons never forget who you were. '

It is more common for people to travel to faraway places to have their cosmetic procedures done there. In countries such as Turkey or Brazil, costs are considerably lower than in European countries.