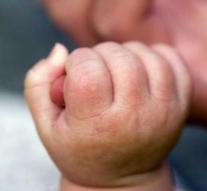 brugge - A 21-year-old woman from Knokke-Heist in Belgium is in prison on suspicion of trying to kill her baby with poison. The boy was given Haldol, a remedy for psychosis. The mother denies involvement.

The child was brought to the hospital in Knokke with poisoning symptoms two weeks ago by his mother. Her ex-partner was interrogated, but was released. The two had split up in January.

The detention of the mother was extended by one month on Tuesday, reports the Public Prosecution Service in Bruges. The OM does not want to say anything about the case.