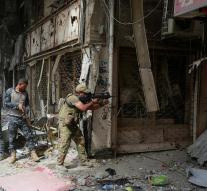 mosul - The Iraqi army expects to take in the last 'meters' of the Old City of Mosul. That is what the Iraqi state television reports on the authority of her correspondent embedded with the troops in Mosul. 'It's a matter of hours. Then victory is declared 'let the channel know.

The Old City is a twist of winding streets where the houses often have to be conquered one by one.

At the end of June, the Iraqi army knew that it would take only a few days for Mosul to be completely under control. The conquest of Mosul, once a major IS-bulwark, has been taking nine months now