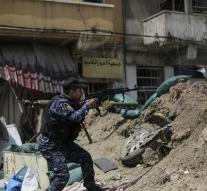 baghdad - A high general of the Iraqi army expects that IS has been completely chased out of Mosul within three weeks. Out of major parts of the city, Islamic State has already been expelled. The battle for Mosul has been taking place since October.

Warriors of IS are now especially in the historic part of the west of the city. It is estimated that there are only 300 IS fighters. The area occupied by IS lives according to the UN 400. 000 people hardly have access to food, water and medical care.