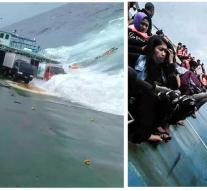 jakarta - The death toll due to the shipping accident in Indonesia has risen to 31. Some 130 passengers on the inoperative ferry have been rescued, says an official from the Ministry of Transport. Three people are still missing.

The vessel, which also carried dozens of vehicles, hit the island of Sulawesi on Tuesday in distress. The ferry made water and began to sink. Then the captain decided to let his ship run to the ground. He hoped to prevent the ferry from sinking completely, authorities say. The skipper and the owner of the ship were reportedly the last two people to disembark.

The rescue service states that a total of 164 passengers and crew members were on board the ferry. On television images you could see how dozens of people cling to the tilting vessel or were in the sea. Indonesia, which consists of more than 17,000 islands, is more often startled by shipping disasters.