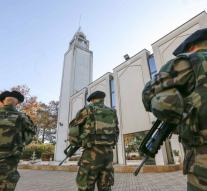 - In almost 2,500 mosques in France must be Friday condemned terrorism fiercely. Before that, the French Council for the Muslim Culture (CFCM) specially prepared a draft text, the organization announced Wednesday. The statement must be on the Day of Prayer clearly show the abhorrence " of the atrocities and the indiscriminate massacres perpetrated in Paris November 13, which cost the lives of 129 people."

The Muslims of France this concrete, according to the CFCM " again that they reject violence and terrorism completely. Terrorism is contrary to the message of peace and brotherhood that Islam propagates ".

French Muslims also stress again " their unconditional loyalty to France and the values ​​of the republic, " and they pray " for peace and security for the country ".