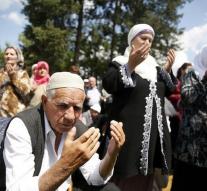 sarajevo - Thousands of Muslims, including the outgoing Turkish Prime Minister Ahmet Davutoglu, on Saturday inaugurated the rebuilt mosque in the Bosnian Serb Banja Luka. The Ferhad Pasha Mosque was the capital of the Serbian republic in Bosnia razed during the war in the nineties with the ground.

Davutoglu, whose government pulled the purse for the rebuilding of the mosque, opened the prayer house. The mosque will bring a message of peace, he said.,, Bosnia and Herzegovina, with its Muslims, Catholics, Orthodox and Jews, one body, one heart '', Turkish Prime Minister stated with reference to the separation plan of some Bosnian Serbs.,, If an attempt is made to divide it, it would mean that the heart is cleaved. ''

The sixteenth-century Ferhad Pasha or Ferhadija mosque, which was under the protection of UNESCO, was blown up in 1993. The Bosnian Serbs would all traces of Ottoman and Islamic influence in Bosnia want to erase. In the parking lot that they made is now a mosque risen again from the ground. Which is largely built from the stones of the old, that have emerged from the neighboring river Vrbas.

High Croatian Roman Catholic, Serbian Orthodox and Jewish clergy attended the inauguration at. They spoke warm words. The high guests and interested Muslims from across Bosnia were protected by a thousand policemen. Authorities sealed off the center off and laid it dry.

The reconstruction of the Ferhad Pasha Mosque encountered fierce resistance from Bosnian Serb nationalists in Banja Luka, where only ten percent of the original Croatian and Muslim population is about. At the groundbreaking ceremony were Serbian nationalists visitors. There were dead and dozens injured.