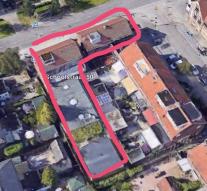 zoetermeer - A mosque in the old village of Zoetermeer was built illegally. The Islamic Foundation of the Netherlands canceled the prayer house without a license. Residents have complained about noise problems for months.

The foundation recently built a barn on the School Street for a prayer house. It has now been found that the building, which is adjacent to the backdrops of its inhabitants, is approximately three times the size of the plan.

The issue came to light after complaints from residents, who especially suffered during the Ramadan from the many visitors who were open to prayer.

According to the college of Zoetermeer, there has been a breach of the destination plan. 'The barn should not have been built environmentally, and we have also informed that owner. An environmental permit must be requested, 'said Marc Rosier, spokesman for the spokesman, VVD.

Coalition Party List Hilbrand Nawijn (LHN) is confused about the progress. 'Residents have long been complaining about the enormous traffic and noise, but the municipality has not done anything about it,' said councilor Benita van Wegen. 'Only after we went to the elder with the complaints of the residents and demanded that the new mosque be measured, something has happened. I think that is very bad.

A mosque on the Van Leeuwenhoek Avenue in Zoetermeer has also been converted without permission. The prayer house is located in a business building and is not allowed. The municipality has recently closed the activities.