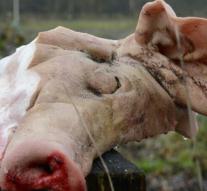 - A mosque in Berlin Wednesday were sent half a boar. The package also contained a Quran, the Berlin police reported Thursday. The sender is not known.

A courier gave the package during the prayer in the mosque in the multicultural Kreuzberg district. After the prayer the Muslims opened the package and discovered the contents.