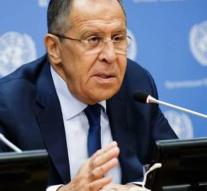 moscow - For Russia, any form of escalation on the Korean peninsula is unacceptable. That is what the Foreign Minister Sergei Lavrov said on Monday to his American ambassador Rex Tillerson during a telephone interview. Moscow responded to the warning from Donald Trump that 'only one thing works' in the deal with Pyongyang. Trump thus aimed at military intervention.

'Lavrov has stressed that the tensions are still further due to the unacceptable US military preparations. He has urgently advised to resolve the contradictions by diplomatic way, 'said a spokesman for the Russian minister.

The Americans also demanded the return of Russian real estate in Washington. By 2016, when Barack Obama was still in power, the US deprived 35 Russian diplomats for interfering with the Kremlin in the election campaign. The premises from which that would have happened were seized.