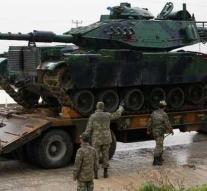 moscow - Russia is going to plead in the United Nations for stopping the Turkish military operation in Syria. That said Franz Klintsevich, a prominent member of the Russian Parliamentary Committee on Security.

The Turks are conducting a military operation against Syrian-Kurdish militias in Afrin in the north of Syria. Ankara sees the militia as an extension of the terrorist PKK (Kurdistan Workers' Party) and wants to prevent an independent Kurdish state from the wars in Syria and Iraq.