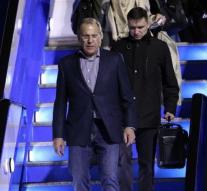 moscow - Russia would still like the United States are represented on Syria meeting in Kazakhstan. Kremlin spokesman Dmitry Peskov stressed on Russian television that it is impossible without American involvement to achieve a 'constructive solution' to the ongoing conflict.

Russian Foreign Minister Sergei Lavrov said earlier that the US are invited to the conference in Astana, where officials from Iran, Russia and Turkey will be present. That was against the sore spot of the Iranians, who are not waiting for a delegation from Washington.

'We have not invited the Americans and we oppose their presence in Astana,' said Iranian Foreign Minister Mohammad Javad Zarif this week. For the Russians was no reason to revoke the invitation to the US. According to Peskov, the peace process 'is too complex an opportunity to have complete harmony. '