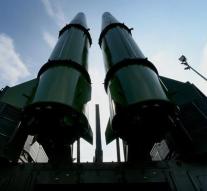 - Russia moved missiles that can be equipped with nuclear warheads in Kaliningrad, a small enclave on the Baltic Sea. That confirmed a US intelligence official Friday after reports in Estonian media.

It is still unclear why the Iskander missiles to Kaliningrad are placed according to the official. A few years ago a similar missile system was brought to the enclave between Poland and Lithuania for a military exercise. It is also possible that it is a political signal towards NATO.