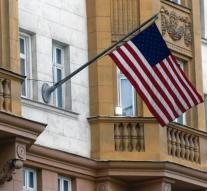 moscow - Russia called the second highest American diplomat in the country on Saturday. Moscow protests against the planned search of the Russian trade mission in Washington, the Ministry of Foreign Affairs in Moscow reported in a statement.

The inspection of Russian diplomatic property is called 'illegal', a 'gross violation of diplomatic immunity' and 'an aggressive act without precedent. 'US secret services could take advantage of' anti-Russian provocations 'by installing' compromising objects '. If the United States does not bind, as stated in the statement, Russia will do the same with American diplomatic posts as the Americans with Russian.

Russia had to conclude diplomatic posts in Washington and New York by Saturday in the striking game between the United States and Russia. Also, a post in San Francisco must close.

The diplomatic quarrel began with the expulsion, at the end of last year, by former President Obama of 35 Russian diplomats because Russia would have mixed in the US elections. At the end of July, Congress adopted sanctions against Russia for the issue where the US had to bring back the number of staff at their diplomatic posts in Russia with hundreds.