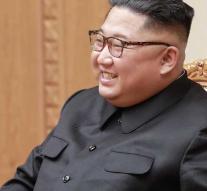 moscow - Kim Jong-un wants to visit Russia. President Valentina Matvjenko of the Russian House of Lords said this after a meeting with the North Korean leader.

She spoke to Kim for an hour in the North Korean capital Pyongyang. 'Kim wants peace. He told me that he considers it very important to speak to the President of Russia, 'said Matvjenko. A date for the visit to Russia still has to be punctured.

In June of this year, President Vladimir Putin invited Kim to visit Russia.