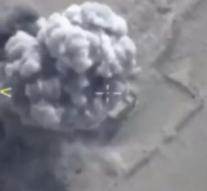 moscow - By Russian air attacks on Islamic Islamic Territory Movement (IS) in Syria four IS leaders were killed. In total, about 40 warriors died during the attack on the city of Deir al-Zor, the Russian Ministry of Defense said Friday.

Among the killed terrorist leaders, according to Moscow Muhammad, al-Shimali, who was responsible for new recruits, and Goelmoerod Chalimov, named by the Russian army 'Minister of War of IS'.

According to Interfax press office, Chalimov is a former Tadzjikistan police officer, who received a US education in the fight against terrorists. By 2015 he was subjugated and passed to IS. In a video clip he threatened to bring the jihad to his Central Asian homeland. The US had promised a $ 3 million reward in 2016 for indications of Chalimov's residence.