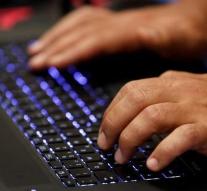 sotsji - Russia calls accusations 'absurd' that Russian secret services have secretly overlooked their American colleagues in recent years. That would have happened through the widely used anti-virus software from the Russian company Kaspersky.

The New York Times came with the message about the espionage. Israeli spies would have caught Russian spies in spying on American spies.

The Kremlin spokesman said on Thursday that the Russian government has nothing to do with it at all.