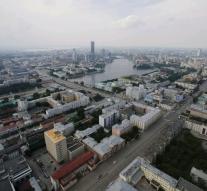 moscow - Moscow police on Monday in a big action 150 migrants arrested suspected of links with Islamist militant organizations. This was reported by the newspaper The Moscow Times Tuesday.

House searches were carried out, but except suspicious literature and the flag of the banned extremist Hizb ut- Tahrir soennietenorganisatie found nothing special.

Last week the Moscow police reported the arrest in a time of five hundred migrants from former Soviet states.