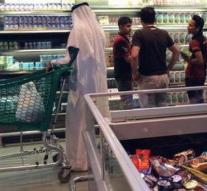 rabat - Morocco has promised to send airplanes with food to Qatar. The Moroccan Ministry of Foreign Affairs stated that Rabat wants to show solidarity with fellow Muslims. 'Especially during this holy month ramadan.'

Earlier, Iran also sent all Qatar ferry carriers with fruits and vegetables to prevent deficiencies in the oil state. Qatar has been isolated by a diplomatic conflict with surrounding countries, which accuse Doha of financially supporting extremists.

The 'blockade' of Qatar may eventually lead to humanitarian problems, because the food supply country is largely dependent on imports from neighboring countries. Morocco continued to remain neutral in the conflict on Sunday. The government of the North African country offered to mediate between the rogue wave states.