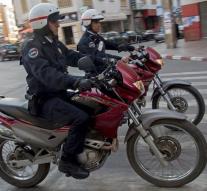 rabat/al - Moroccan police on Friday rolled up a network of terrorists that will include conspired with bomgordels attacks. Moroccan media reported that have been arrested in the morning seven suspects in raids in five places.

In one of the raids suspects opened fire on the police. It is unclear whether this casualties. The actions include a suburb of Rabat and places south and southwest of Casablanca firearms, explosives and found bomgordels.

The dismantling of this jihadi TenneT work would be one of the largest and most important operations that the investigative BCIJ (Central Bureau Gerchtelijk Research) has ever done.