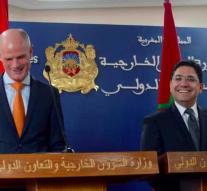 rabat - Morocco opposes the plan for reception centers in North Africa, where it is necessary to determine whether migrants are entitled to European asylum. According to the Moroccan minister of Foreign Affairs, such reception locations are counterproductive.

'Morocco is generally against any kind of centers. That is part of our migration policy and a national, sovereign position ', says Nasser Bourita in an interview with the German newspaper Die Welt. Even if the EU wants to go for it in the pouch, it will not change Morocco's position, he says. According to Bourita, the EU also makes the migration problem bigger than it is.

EU countries have been in a stalemate over the migration issue for some time. Earlier this year they agreed after long deliberation to build shelters in Africa and Southern Europe.