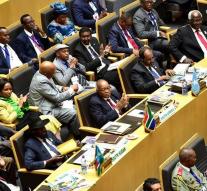 addis ababa - The African Union Morocco Tuesday formally readmitted as a member for more than thirty years after Rabat withdrew from the precursor of the continental organization because of a disagreement over the status of Western Sahara.

Morocco's King Mohammed VI, who started a campaign last year for re-entry, waved to the assembled leaders at the summit in Addis Ababa. 'Africa is my home and I come home now,' he said to the applause. 'I missed you all. '

The North African kingdom at the time, stepped out of the Organization of African Unity after Western Sahara had acknowledged. Morocco made largely service since 1976 in that area. Foreign Minister Mohamed Salem Ould Salek of Western Sahara called the accession of Morocco to the AU already a 'positive step' because that would take them diplomatically on equal terms.