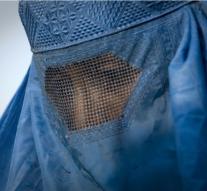 rabat - Many entrepreneurs and companies in the clothing sector in Morocco have received a letter stating that they have 48 hours time to get rid of their stock burqa. Production and sales of burqas will be restricted according to new guidelines from the Ministry of Interior.

The Ministry kept himself according to Moroccan media Tuesday still in the background, but an anonymous senior official from the same ministry confirmed to the news website Le 360 ​​that the guidelines are indeed scattered Monday.

Traders have been told that they can not sell more burkas for security reasons. Afghan gear which the woman from head to toe in a kind of blue tent is hidden, is used according to the Moroccan authorities in criminal and terrorist activities.

The burqa is seen by some as a sign of piety. In the Islamic world it is common for men and women as prescribed demure dress. The way 'modest' clothing is completed, it is often culturally determined.