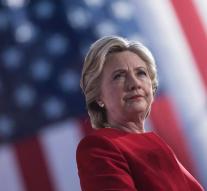 - Democratic presidential candidate Hillary Clinton in absolute terms more voters got behind the elected President, Donald Trump. According to the latest census Clinton has 47.6 percent of the vote, against 47.5 for Trump. More than 90 percent of the vote has been counted.

In the final result that does not matter: in the US electoral system, it is important to win a state electors, who eventually appoint the new president in an electoral college. Trump has collected 289 electoral votes, more than sufficient for the required 270 votes in the electoral college.

It would not be the first time someone becomes president without being the 'popular vote' behind it. The last time that happened was in 2000, when Al Gore despite a majority vote to hold in addition to the power, in favor of George W. Bush.