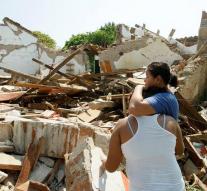 mexico - The number of casualties caused by the earthquake in Mexico on Thursday has risen to ninety. The dead fell into three different states. Oaxaca was severely affected by 71 deaths.

The quake for the coast of Chiapas was extremely powerful with 8. 1. The epicenter was at sea, at least 130 kilometers from the Mexican west coast. Vibration was even felt in Mexico City, the capital, which is hundreds of miles away.

One day after the quake, hundreds of aftershocks were counted.