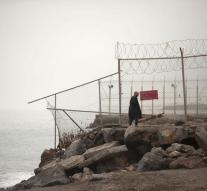 ceuta - In a storm the border fences around the Spanish city of Ceuta, which lies on the coast of Morocco, on Monday 32 migrants injured. They are included in more fractures in the University Hospital in the North African city.

Spanish media reported that early in the morning between two hundred and 250 black African migrants attempted to get over the fences. It worked about 60 percent of the revolutionaries, the authorities estimate Ceuta.

Ceuta is since 1415 European territory, first Portuguese, then Spanish. Many Africans trying to enter the EU from Morocco via Ceuta and through the further East and also Spanish Melilla.