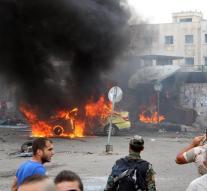 damascus - By bombings in two cities on the Syrian coast on Monday certainly slain hundred people. This was reported by the Syrian Observatory for Human Rights.

With the explosion of seven car bombs in Tartous and Jableh in the west of Syria, which is controlled by the regime, were also at least 120 people injured. At least 48 people were slain in Tartous and certainly 53 in Jableh, said the human rights group.

Islamic State has claimed responsibility for the attacks. According Amaq, the news agency of the jihadist terrorist group, have IS fighters,, meetings Alawis in Tartous and Jableh 'attacked, citing the minority group to which President Bashar al-Assad belongs.


The coastal provinces of Latakia and Tartous since 2011 firmly in the hands of government forces. In the past, rebel groups repeatedly attacks carried out in the fields.