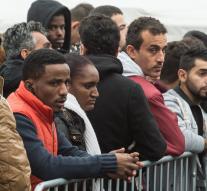 passau - This year there are 964 574 refugees arrived in Germany. This was reported by the newspaper Passauer Neue Presse Monday based on answers by the Ministry of Interior to parliamentary questions, which are seen by the newspaper. The sum is based on the registration of refugees which are distributed among the German states.