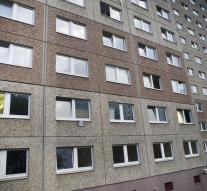 berlin - More than 900 times there were incidents in the past year in an asylum reception in Germany. Federal criminal police BKA made on Wednesday, German media reported.

The detective had 921 offenses until December 27th. The vast majority of cases, 857, the BKA think that the attacks were carried out by right-wing extremists. It went mainly to vandalism and intimidation. At 150 incidents were caused by acts of violence, including arson (66) and the use of explosives (4).

The number of incidents is less than last year when there were 1031 incidents were counted. Among them were more violent el 94 arsons and 8 times using explosives.