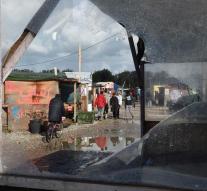 - Shortly before the French authorities begin the evacuation of the refugee camp 'the jungle' in Calais, there are more than 8,100 refugees at this makeshift camp. According to a census Saturday from organizations that help immigrants.

Organizations L'Auberge des Migrants, Refugees and Help Utopia 56 fear that reaches a large number of 8100 illegal immigrants after the evacuation of the jungle in another refugee camp, with far fewer amenities and no helpers. According to aid agencies could fall many of those migrants held by traffickers, especially as winter is approaching.

The French authorities begin Monday with the removal of the migrants.