Home / World / More than 800 deaths from natural disasters in China 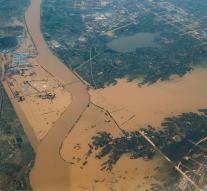 peking - More than eight hundred people were killed and two hundred missing after a series of natural disasters that have hit China since June.

It is the highest number of casualties in five years since a comparable period in 2011, state media said Tuesday.

Large parts of central, eastern and northern China this summer affected by floods, while a typhoon this month left a wave of destruction. And in June, at least 98 people were killed by a tornado in the eastern province of Jiangsu.


Since the beginning of this year came to the land 1074 people by disasters, 833 of them since June, while 270 people are missing.

The direct economic losses this year totaled more than $ 44 billion (40 billion euros). The disasters have destroyed 400 000 houses and displaced more than 6.2 million residents to other locations.