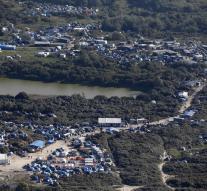 - The number of refugees in Calais waiting for an opportunity to come to England has grown to over 6000. That have let local authorities know , British media said Saturday .

That means that the number of asylum seekers has tripled in the coastal city since early this year. In 2013 there were only three hundred . As it becomes increasingly difficult to reach England via the Channel Tunnel , the refugees also remain longer in the massive tent camp what has occurred.

France has responded to this by putting containers down where the asylum seekers can stay in .