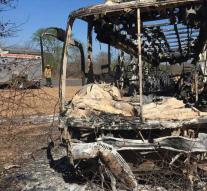 harare - At least 42 occupants of a bus were killed in the south of Zimbabwe after the vehicle caught fire. At least 27 passengers were seriously injured in the accident near the city of Gwanda, according to the local police spokesman. According to the Red Cross, the bus was on its way to South Africa.

Photos of the accident show a completely burnt steel skeleton of the bus. According to the spokesman, the first studies showed that a passenger carried a can with gas or petrol.

Last week, fifty people were killed in a collision between two buses in the country. Serious traffic accidents are the order of the day in Zimbabwe. Causes are not only the speed, but also technical problems of the vehicles or the poor condition of the roads.