Home / World / More than 3,500 fighters were eliminated in Afrin 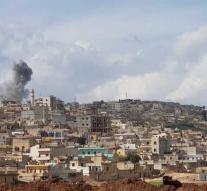 ankara - The Turkish forces have now eliminated more than 3,500 Kurdish fighters around Afrin in northwestern Syria. The army did not report how many fighters were killed or taken prisoner.

The army launched an operation on 20 January that aims to expel Kurdish fighters from the YPG from the region. Turkey fears a Kurdish state along its southern border and sees the YPG as an extension of the terrorist Kurdish PKK.

The Turkish forces have support from militias of Arab Syrians who fear that the Kurds will expel other groups for the establishment of their own ethnic state. Meanwhile, according to reports from, among others, the YPG fought on the outskirts of Afrin. On the night of Thursday-Friday, eighteen deaths would have occurred as a result of Turkish shelling.