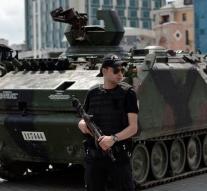 - When the failed coup attempt Friday and Saturday in Turkey 208 people slain by the military coup and, moreover, about a hundred coup plotters were killed.

Turkish Prime Minister Binali Yildirim said on Monday that 145 civilians, sixty police officers and three soldiers were slain by the coup plotters. Ankara had previously indicated that about a hundred people who wanted to carry out the coup, were slain.

In connection with the coup attempt are 7543 people arrested, said the prime minister. It is about 6038 soldiers, hundreds of police officers, 755 judges and prosecutors and 650 civilians. Yildirim said it is not a good idea,, hasty to take a decision on the reintroduction of the death penalty, but the voice of the people should not be ignored. ' By mass of support is called to the government of President Recep Tayyip Erdogan to the capital punishment for the coup plotters.