Home / World / More than 200 dogs liberated in the Czech Republic 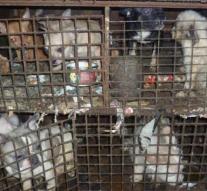 prague - More than two hundred severely neglected dogs have been released from a breeder in the Czech Republic. The dogs, including many chihuahuas, were found in an old single-family home in the town of Kamenice nad Lipou. The animals have been transferred to shelters across the country.

The veterinary inspection SVS labeled the incident as 'extraordinarily serious. 'The dogs lived in their own excrement and suffered from skin and parasitic diseases. Animal activists have been fighting for years against the illegal trade in puppies. Young dogs from breeding farms in Eastern Europe are often sold for a lot of money in Western Europe. Whether this was the case in this case is not known.