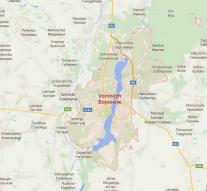 voronezh - The death toll from a fire at a hospital in Russia has risen, according to news agency TASS 21. Two are still missing, the news agency reported Sunday according to Russian authorities. Interfax news agency had earlier four dead, seven injured and seventeen missing.

About fifty people have been rescued. As a possible cause of the fire is short circuit and not called following the safety rules.

The hospital is in the Voronezh region, which partly borders on Ukraine.