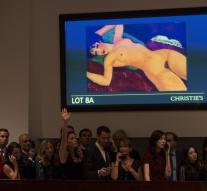 - The painting now couché by Italian artist Amedeo Modigliani is in New York for more than $ 170 million (approximately 158 million euros) changed ownership. The cloth was at an auction at Christie's bought by an unidentified Chinese buyer.

The painting of a reclining nude woman in 1917 or 1918 just missed the title of most expensive work of art ever sold at auction. The brightly colored cloth Les femmes d' Alger Pablo Picasso spent at an auction in May, 179 million dollars.

Although the identity of the buyer was not revealed, the auction house did know that now couché was bought by a collector from China. The highest amount in the past paid for a work by the Italian was over 70 million dollars.