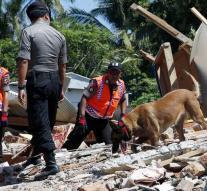 jakarta - The emergency services in Indonesia found more bodies between the rubble of collapsed buildings after the earthquake on Lombok. The death toll has risen to 131, reports a spokesperson for the emergency response service BNPB. According to him, the number of deaths will increase even further.

Due to the major damage to houses that caused the earthquake, 156,000 people have been displaced. Approximately 2,500 people were admitted to the hospital with a force of 6.9 with severe injuries after the quake. Among the dead are also two people who perished on the western neighboring island Bali.

The hope that still survivors are found is fading and a humanitarian crisis is threatening. Oxfam warned Tuesday that clean drinking water is scarce because of the dry weather of recent times. Affected residents would also need clothing, medical supplies and food in addition to water.