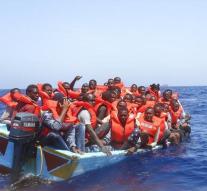 rome - Since the beginning of this year, according to the International Organization for Migration (IOM), more than 100,000 migrants have reached Europe by sea. Most of the refugees joined the Italian coasts, totaling 85,183. That was more than in the same period a year earlier (71,279), according to the Geneva-based organization on Tuesday.

Substantially fewer migrants went to Greece (9290), Cyprus (273) and Spain (6464). In the run-up to a meeting of Ministers for the Interior of EU countries on Thursday and Friday, the IOM called on Italy to support Italy in the refugee crisis.

On the dangerous route across the Mediterranean Sea, 2247 migrants came to life this year.