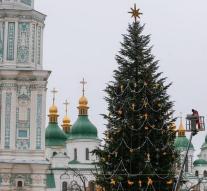 brussels - The EU spends the next four years 104 million to Ukraine to increase the transparency of public administration. The money is part of a previously agreed range of 300 million to include the fight against corruption and will only be paid if the government promised to continue reforms.

During the third so-called Association Council in Brussels on Monday were also signed agreements on cooperation with EU neighbors Ukraine worth 365 million euros. In addition, there was a green light for 600 million of loans from the European Investment Bank.

EU foreign policy chief Federica Mogherini ' pointed to the huge reform '' in terms of economy and democracy and said that the EU Ukraine ' firm 'continued support. It is, according to her now that legislation is effectively implemented so that Ukrainians can have a better future.

Mogherini also returned to the agreement that Prime Minister Rutte and 27 other government leaders on Thursday closed annexed to the Association Agreement between the two parties. This decision responds to the concerns that emerged in the Dutch referendum, paving the way for full implementation of the treaty, said the Italian. The provisional application delivers according to its already many benefits, including in trade.

Waiver for the 45 million Ukrainians wishing to travel to the EU is on its way soon ' ', Mogherini concluded.