Home / World / More than 100 deaths in Nigeria due to flooding 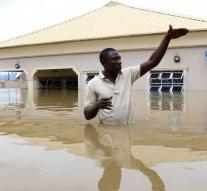 lagos - More than a hundred people have died in Nigeria in recent weeks because two rivers have left their banks. The NEMA Emergency Agency reported to the BBC that forty people were killed in the Niger state alone.

Due to continuous rainfall, much land has been flooded along the rivers Niger and Benue. Thousands of people in the south and middle of the country had to flee. Many agricultural crops have also been lost.

The authorities warn of more flooding in the coming weeks because it continues to rain.