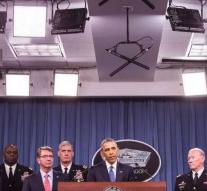 - US President Barack Obama gives more powers to the elite unit in charge of the fight against terrorism. Government Employees assume that the staff of the Joint Special Operations Command (JSOC) more often carry out missions against terrorist groups around the world, according to The Washington Post Friday.

According to the newspaper the JSOC could also going to provide information and guidance to intelligence services and the armed forces of Western allies. There would also be joint operations can be performed with the Western partners.

The JSOC in 2011 was involved in the killing of Osama bin Laden, leader of al-Qaeda. In recent years carried the elite unit clandestine operations in Iraq, Syria and LIBE. The US authorities fear that if Islamic State of Iraq and Syria is expelled, supporters of the terrorist movement be spread over many countries.