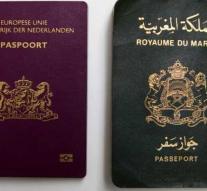 luxembourg - The 28 member states of the European Union granted their citizenship to 995,000 people in 2016. That was 841,000 a year earlier. More than one in eight naturalized newcomers came from an EU country. This is shown by figures from the European statistical office Eurostat.

The largest group has Moroccan nationality. It involved more than 100,000 people, of whom nine in ten were citizens in Spain, Italy or France. Italy and Greece gave a total of more than 60,000 Albanian citizenship. The main other countries of origin were India, Pakistan, Turkey, Romania and Ukraine.

In the Netherlands, 28,453 people were national, an increase of 2 percent. Almost 14 percent came from Somalia, followed by Morocco (11.8 percent) and Turkey (almost 10 percent).