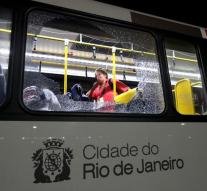 - The organizers of the Olympic Games in Rio de Janeiro taking action to improve safety. A series of violent incidents over the past week cast a shadow over the international sporting event.

Thus fell the windows of a bus carrying journalists, three Swedish tourists were briefly kidnapped and robbed the Portuguese Minister of Education. Last Saturday moreover flew a bullet through the roof of a press tent on horseback in Deodoro Sports Complex.

According to the security chief of the event, Luiz Fernando Correa, the police will intensify patrols on roads between the Olympic Park and Stadium in Deodoro. The route passes through some poor neighborhoods.